It was a hot afternoon in Elk Grove, California. So hot in fact, that when I arrived at Ge Moua’s farm around 4 p.m. Sweat had pooled around my legs and it was nearly impossible to lift them from the driver’s seat. For months, this region was simply a red dot on my research project map. I would spend four months traveling around the western U.S., collecting stories from women in agriculture–a plan stenciled out in dark ink, Google maps, and Word documents flooded with farmer’s emails and market addresses. Yet, despite my rigorous planning, nothing could prepare me for the Sacramento heat.

Ge greeted me in long pants and a long-sleeved button down. Her red, checkered apron provided a second layer, as if she could fight the heat with its thickness. She had been working outside since seven in the morning, but I could hardly spot a drop of sweat on her skin. When she suggested I drive the 400 meters to meet her by the crops, I decided that I better walk.

If you were to follow the rows of crops that circled the Moua Family’s eight acres–of arugula, kale, bok choy, purple eggplants, and bite-sized cherry tomatoes–you would assume that a staff of ten people farmed this land. Instead, the crops that sprout from Ge’s land are tended by two pairs of hands: those of Ge and her husband’s. Further striking, Ge believes that her eight acres don’t require the machinery and tools commonly used by other farmers. Later that evening, she would show me how her hands move through a perfectly linear row of herbs with combative speed, pulling at each weed, then barely lifting off the ground before sliding over to the next invader.

The daughter of subsistence farmers, Ge grew up in the country of Laos, where she learned to grow rice, corn, and Asian vegetables. From her parents, Ge inherited a knack for sprouting crisp, long beans, a preference for cookie-cutter crop lines, hand-held hoes, and hand-picked weeds, thrown back to the soil as fertilizer.

She also learned what it feels like to know the contents of her meal like the words of her favorite song, without hesitation. She would never have to pause and wonder if she was feeding herself harmful chemicals, or stripping the soil of its nutrients and washing pesticides down the surrounding streams.

“I don’t have to worry about the food I’m growing, because I know exactly what I’m growing,” explained Ge. This feeling of security is exactly what inspired her to follow in her parents’ footsteps as a farmer.

After leaving Laos, Ge settled outside of Seattle, where she farmed from 1995 to 2005. Farming in Seattle, she explained, was not too different from farming in Laos. Instead, unfamiliarity arose when Ge relocated to the Central Valley of California.

After a four-year break from farming, Ge decided to root her passion into this new soil. Ge turned to California FarmLink, an organization that links independent farmers with land, loans, and other resources necessary for developing a successful farm business. With the help of California FarmLink, Ge locked down the marketing side of California farming within her first year.

Soon, Ge’s new business environment no longer posed a challenge.  Instead, a new trial took its place, and this one was impossible to escape. When Ge mentioned the challenges posed by the Central Valley climate, I remembered the sticky feeling that lined my limbs, like an extra layer of skin, and a sharp dryness resurfaced in my mouth, even as I sipped from the Nalgene bottle in front of me. It was as if I had forgotten the heat, displaced from one haze by a second haze, created by Ge’s words, her reflections on her childhood spent in Laos, the practices she’s adopted, and the practices she’s changed. 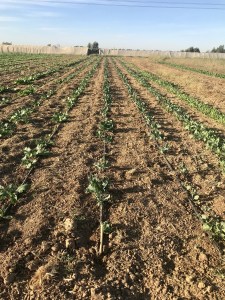 In Central California, the dog days of August resurface for most of September, only to rear their scorching heads again in October, and perhaps pop in for a surprise visit in February and March as well. Ge had to worry about irrigation pipes and how to conserve water resources, while simultaneously providing her crops with the moisture necessary to survive a drought. Combating these concerns produced countless additional expenses.

“How about the stickiness, the constant heat-headache, the mindless haze?”–-I wanted to ask. Instead, I nodded along as Ge lamented the complexity of irrigation pipes, suddenly aware not only of my sticky limbs, but also of my comparative weakness. Ge and her long layers had stood, submerged in the Elk Grove heat since seven this morning, yet her only concern was that I not walk around the farm too much.

In that moment, the only question I could think to ask was “why?” Why did Ge decide to move from a relaxed Seattle to a suffocating California? For Ge, the answer came without a second of hesitation: she did it for her family. The Pacific Northwest was crowded, most schools were stronger in California, and her daughter, now a medical student, had dreamed of attending Berkeley. With a passion for family, Ge began farming in California, and with a passion for family, Ge continues to farm in California.

“I want my kids to know that they can grow their own vegetables if they wish to,” she explained. To Ge, this self-sufficiency, as well as a respect for the land, are essential.

She would never push her children to pursue farming careers, as she only hopes they choose lives of passion and stability. Still, if they wish to grow vegetables in a backyard garden, whether for an income or a salad, they will know how to do so, and they will value the food on their tables. Ge’s work is driven not only by her own family, but by the idea of family involvement in sustainable agriculture, in general. 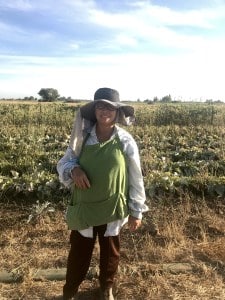 “Grocery shopping is not a luxury,” said Ge. “You never go to a grocery store to spend time with your family, you go because you need food.”

Ge has realized that most of her customers treat the farmers market as luxury events. They come to view the fresh produce, to take whatever looks good, and to spend time with their families. Beyond her customers, Ge has perceived a connection between farming and family strength. In the past five years, she has met many couples in their 20s and 30s, often with young kids, that have begun to farm.

“These people are highly educated,” said Ge. “They could make a good living by not working from dusk to dawn.”

However, these young people are focused on conserving the environment, not swimming in pools of income. Plus, they enjoy farming, and especially the idea of going back to the basic principle of working the land.

“History never changes, you can go so far, and then you have to go back,” said Ge. “I think people are realizing that growing your own vegetables is better than buying them at the store. That’s why these young, educated people are farming. I think it’s going to change the shape of this country.”

Ge believes that this trend of going back to the land has brought many families together. As we sat at her picnic table, under the shade of a tarp, Ge reflected on a cultural shift in the 50s and 60s. Most men would go off to work, the children would go to school, and the women would stay home. Not only did these expected roles introduce countless limitations, but many people would not see their spouse or children for most of the day.

“Yes!” I responded. “A different sort of rich!” I may not be a farmer, but all of a sudden, I felt as if I too had hit some sort of jackpot. My conversation with Ge condensed countless concepts, phrases, images, and words that had floated around in my brain–nebulous–for the past few months.

As I walked away from Ge Moua’s farm, a bag of ripe tomatoes swung from my right shoulder. In that moment, I felt the urge to slap myself back into that millennial disillusionment I often feel towards most things in this country. Yet, a bag of tomatoes weighed down my dominant arm, so instead, I imagined. I drew up an image of all of those young people, farming not because they needed to, but because they truly valued the environment and each other. I imagined those people going back to the land, and for that one moment, I let myself feel hope.

You can find Ge Moua and her hand-picked sprouts at the Central Farmers Market on Sundays from 8 a.m. to 12 p.m.

*Editor’s Note: This article originally mentioned the Midtown Farmers Market, but Ge has since switched to Sacramento’s Central Farmers Market.

Emma is a Boston-based writer, activist, and distance runner who primarily explores topics of environmental justice and women's rights. Emma graduated from Grinnell College in 2018. Beginning in July 2018, she spent four months traveling around the western United States, and collecting stories from women in agriculture, including two months in the Central Valley of California.