As luck would have it, two of this week’s new movies present distinctly different views of the world and how to live in it. In “Leave No Trace,” a father and daughter live apart from modern civilization, out of sight of people and buildings, in a forest that also happens to be a public park. In “Skyscraper,” we’re shown a building, so tall and massive, and designed to house so many people, that there’s actually a multi-level park inside it.

Ben Foster plays the father in “Leave No Trace,” a man so traumatized by his experiences in the military that he’s only relatively comfortable surrounded by the peace and quiet of nature. And he provides a decent, stable life for his daughter, played by the remarkable Thomasin McKenzie, albeit not a life that the authorities recognize as suitable. They forage for mushrooms and other edible plants, share a small tent, collect rainwater, and occasionally venture into the city to buy staples, funded by the illegal sale of his VA prescribed drugs.

It starts out like a somewhat more passive, only child version of last year’s wonderful “Captain Fantastic.” It’s not surprising that others would find their living situation questionable at best, or be confused by the fact that they don’t consider themselves to be homeless. They’re both physically healthy and the daughter is even ahead of her grade academically. However, that’s not enough to satisfy social services who are worried, among other things, about the daughter’s lack of socialization and attempt to find them a somewhat more normal living situation.

Dwayne Johnson is another damaged father in “Skyscraper,” also ex-military and a former FBI agent who lost part of his leg and foot in a hostage situation. Since then he’s become a private security consultant, brought in to assess the Pearl, the titular skyscraper, recently built in Hong Kong and the world’s newest tallest building. As part of his consulting gig, his wife (Neve Campbell) and two children are also brought in to be the first, ill-fated residents of the tower.

While it’s been designed to withstand all manner of accidents and natural phenomena, it isn’t completely invulnerable to a well-coordinated attack by an international villain who has an old score to settle with the owner and developer of the building. The obvious comparison here is a blend of majority “Die Hard” and minority “The Towering Inferno,” as our seemingly indestructible hero has to save his family, as well as the building. Although frankly the building and anybody else who might be in danger are significantly less important, as is anything resembling believability. 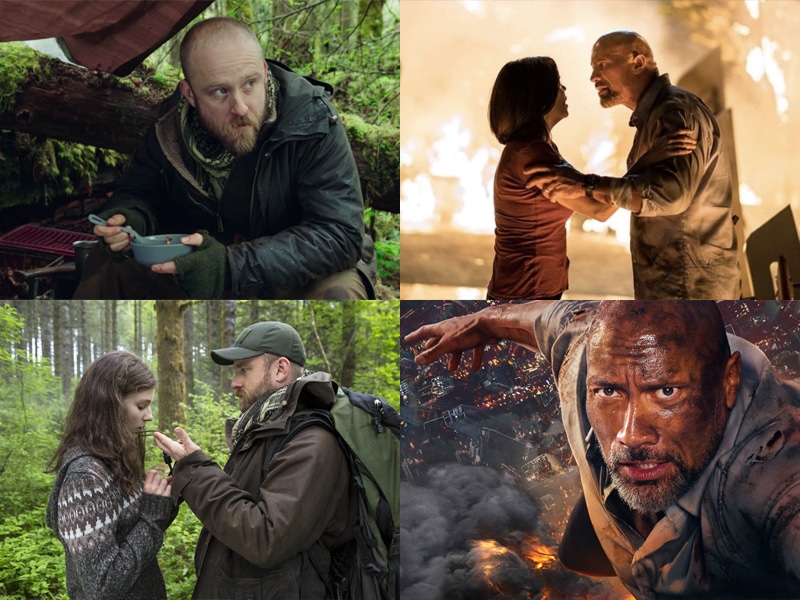 The two movies aren’t quite as dissimilar as they could be. As the title might suggest, in “Leave No Trace,” there’s a desire to live largely in harmony with nature – although it’s perhaps more about not being found as it is about a minimal footprint. And in “Skyscraper,” we’re told that a pair of turbines in the building produce enough power to make it self-sustaining, a different take on a small footprint – although their existence has far more to do with producing an obstacle later in the movie, as they spin at a furious rate in front of a control panel that’s about as poorly placed as anything outside a “Star Wars” episode. But then this is a building that also has a rooftop room, with screens that pop up out of the floor for no reason other than somebody in the production apparently once saw a shootout scene set in a hall of mirrors.

Where “Leave No Trace” is quiet and brooding, “Skyscraper” is loud and brash, playing almost like a sequel, in tone if not character, to Johnson’s earlier “San Andreas.” But they’re not absolutely the most inappropriate of movies for a double-header. While they’re bound to attract largely different audiences, for the few that might occupy the overlapping segment of the viewing Venn diagram, they could pose an interesting comparison about how best to live in an increasingly populated world: Escape the crowd or embrace it? And how much bigger would The Pearl have to be before Ben Foster’s character might be prepared to live inside the park, inside the building?