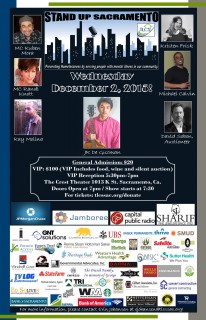 In 1986, Comic Relief Inc. set out on a mission to assist the homeless population in the United States by presenting fundraising events hosted by comedians such as Robin Williams, Whoopi Goldberg and Billy Crystal. Following their example, TLCS, Inc., a private, non-profit psycho-social rehabilitation agency, introduced Stand Up Sacramento in 2013.

On Wednesday, Dec 2 at the Crest Theatre, local comic JR De Guzman, along with Ray Molina, Michael Calvin Jr., Kristen Frisk, and MC’s Randi Knott and Ruben Mora, will honor the tradition by donating their time and talents to benefit and help prevent homelessness among those with mental illness in the Sacramento region.

Having grown up in Sacramento and attended Jesuit High School, JR De Guzman attributes his schooling and ministry work in the community to have evolved from his time as a local youth. Although his material has not discussed his time spent at an all-boys high school, he believes those days in the hallways gave him the liberty to embrace his comedic clout.

“I like doing these shows because it’s not about you anymore,” said De Guzman said, who will showcase his talents for Stand Up Sacramento for the second time this year. “At the end of the day you just want to feel like you did something positive for somebody else.”

TLCS Inc. development director, Erin Johansen, credits every comic in the showcase for their professionalism, but points out De Guzman as last year’s standout.

“JR was new to us last year and he just brought the house down,” Johansen said. “He was a fan favorite so we brought him back for the headliner because he was so popular with our audience.”

De Guzman’s return to the Crest Theatre is also an important landmark to his own career, as the video from last year’s showcase birthed many opportunities that led to his decision to pursue a full-time stand up career.

“You know it’s kind of like a blessing,” De Guzman said. “As much as they are doing for other people, I actually owe a lot to that show too.”

Johansen is thrilled to know De Guzman attributes a portion of his success to the goodwill he presented along with the rest of the comics at last year’s showcase. She says his success is also an example of how helping people benefits all, even yourself in ways you may not see at first.

“When you give, you get. And that is the message to people in any kind of philanthropy,” Johansen said. “It might not come right back to you immediately, but when you are generous in spirit like that, it’s just payoff.”

Tickets are$20 for general admission and $100 for VIP, which includes a reception with food, beverages, silent auction and preferred seating to the show. All proceeds benefit TLSC Inc. and the work they do.

For more information on TLCS Inc. and to purchase tickets, visit TLCSsac.org.

Events • Things to Do

Cesar Alexander is assistant editor for Sacramento Press. A native to California, he enjoys writing and discovering the varieties of art, live music, nature and everyday wonders the Sacramento region has to offer.