It’s a brilliant idea. Lightweight, unobtrusive, and bound to be a new standard in water safety, the Kingii is making waves with its launch as the world’s smallest floatation device.

The Kingii solves the problem of bulky life vests by strapping to your wrist and inflating only when activated by the wearer. Should someone feel in danger, an accessible pull lever inflates a bag filled by a [replaceable] CO2 cartridge, keeping the person afloat until they can get to safety. The life saving device also comes with a compass and whistle, and can stay afloat for over 48 hours.

This gives swimmers, surfers, snorkelers, kayakers, paddleboarders or any of the water-bound population the freedom to move about in the water and the peace of mind to know they have life-saving help should they need it. 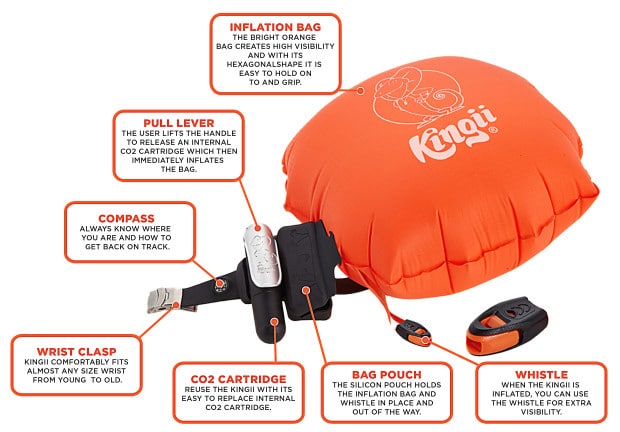 The Gridley, California based company is headed by Tom Agapiades, who came up with the idea after a good friend drowned.

“After I lost a friend in a preventable drowning accident, I developed Kingii as a way to promote the importance of water safety and, hopefully, end this type of tragedy once and for all,” said Agapiades in a release. “For those who would previously forgo wearing a life vest, they can have the same security without the restrictions or discomfort.”

They say their ultimate goal is to reduce global drowning rates, which is at 372,000 a year and is the 3rd leading cause of unintentional injury death worldwide.

In an effort to raise the final funds needed to launch the product in September, Kingii has a crowdfuning campaign at IndieGoGo for the month of July. So popular is the Kingii that they surpassed their goal by over 500% by 5 p.m. the day they began their campaign.

The perk of giving to their crowdfund is a reservation of their first batch of Kingiis, which will ship when they launch. Just over a week remains to give and to claim a giving-based perk.

To learn more about the Kingii or to give to their crowdfund, visit indiegogo.com.