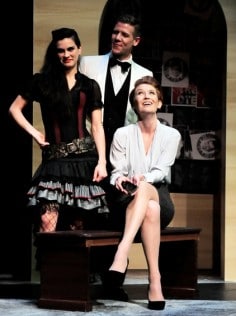 The Sacramento Theatre Company could call itself the Shakespeare Theatre Company if it produces a couple  more shows as inspired and inspiring as its “Julius Caesar,” now on stage for another week.

The words are all Shakespeare’s, but the vision of this modern adaptation belongs to co-directors Kirk Blackinton and Brian Harrower. The two conceived similarly striking adaptations of The Bard for Big Idea Theatre, but this STC production shows what they are capable of when given some money and a professional stage.

In this version of “Julius Caesar,” Caesar (played by Matt K. Miller) is a politician of rock-star proportions. He is hooked in with instant polling, Black Berries and cellphones. But his fame and power are about to do him in when the ambitious Brutus (Jeb Burris) and some co-conspirators plot his demise.

What follows is a political drama in which Brutus himself falls victim to Caesar’s acolyte Marc Antony (Ryan Snyder), who, by brilliant oratory, changes the outcome of Brutus’ plan.

A timeless stage of arches and alleyways (designed by Eric Broadwater) is so effective that there is an almost seamless progression from scene to scene. This play moves with the dynamic power of a modern-day thriller.

Based by Shakespeare on actual events in the 44 B.C. assassination of the Roman leader, this tale takes on contemporary importance in the adaptation by Blackinton and Harrower. The ties between politicians and big-money backers, the cult of personality and the “branding” of parties and participants are very familiar to us today.

“Julius Caesar” is more than just a historical drama, and STC does an excellent job of making it relevant.

Jim Carnes has masters degrees in English and journalism and is a former National Endowment for the Humanities Fellow in popular culture at Stanford University. He has covered Sacramento arts and entertainment for more than 20 years. He currently writes about and reviews theater, dance, music and events in the Sacramento area.