At halftime, down 2-0 at Sacramento’s Bonney Field to the stingy LA Galaxy II, even some of the Sacramento Republic FC’s most ardent supporters figured the team’s magical first-season run would end with the hotly contested semifinal playoff match.

Not so. As the final 25 minutes showed, Sacramento, now 18-7-4, still has a little magic left. The Sacramento club that had spent a good part of the past week wooing Major League Soccer officials who were in town assessing the city for a possible MLS expansion franchise, rallied with three second-half goals by Rodrigo Lopez – two of them penalty kicks and the game-winner a truly magical free kick – to stun the favored club from Southern California. The winning goal came during the extra added time just seconds before overtime, to the delight of the 8,000 in attendance.

The win allows Sacramento to host next Saturday’s USL Pro championship match against the Harrisburg (PA) City Islanders. The championship is scheduled for 7:30pm at Bonney Field (Cal Expo) and is sure to be a sellout.

The aggressively played semifinal match was accompanied by a constant raucous soundtrack of chants, bells and whistles provided by the partisan Sacramento crowd, and lead by the always boisterous Tower Bridge Battalion. They were joined by Sacramento Mayor Kevin Johnson and numerous MLS officials who were on hand to witness in person the excitement that has surrounded the team since making its sold-out Hughes Stadium/Sacramento debut on April 26.

During the week, MLS Officials were treated to a steady diet of dinners, presentations, rallies and a major announcement that the team has entered a letter of intent with Downtown Railyard Venture, LLC, for a proposed 20,000-seat MLS stadium to be located in the railyards district just north of downtown Sacramento, should Sacramento land a MLS franchise. An announcement is expected as early as December that would determine whether or not Sacramento gets a coveted franchise.

If attendance means anything, Sacramento should be way ahead of the pack in the MLS franchise chase. Sacramento’s three Hughes Stadium sellouts of 20,231 all set USL Pro single-game attendance records (out of four matches played there before moving to Bonney Field). Before Saturday’s semifinal match, between Hughes Stadium and Bonney Field, Sacramento is now 12-2-2 at home, averaging a league-leading 11,293 fans a night. Second place in attendance is the Rochester Rhinos, at 4,916 per game.

Saturday’s championship sets up a rematch with surprising Harrisburg, 11-11-7, who defeated Sacramento 2-1 in the above-mentioned Hughes Stadium debut. LA Galaxy II finishes 15-8-6. Harrisburg entered the playoffs as the eighth and final seed before advancing, knocking off top-seed Orlando City 1-0 in its first playoff match.

Tickets for Saturday’s match go on sale at 10am Wednesday. Check out Sacramento Republic FC on the web at www.sacrepublicfc.com for more details. 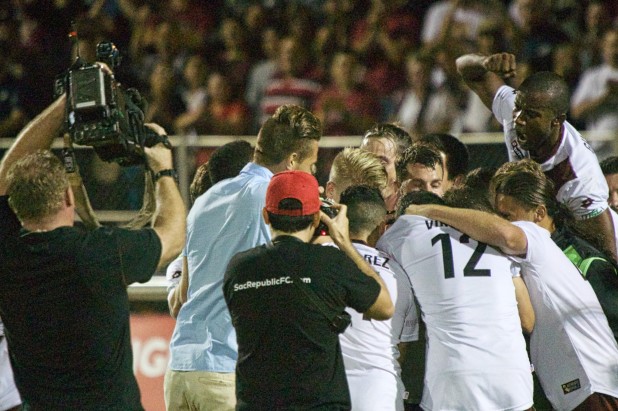 Kings Playoff Drought Continues: How To Win The Franchise Back Next Year

A resident of Sacramento since graduating with a journalism degree from the University of Nevada, Reno, Steve spent the 1980s at The Sacramento Union, working as a sports writer, music reviewer and crime reporter, among other assignments. He's spent the last 25+ years working in government public affairs for both state and federal agencies and currently is with the U.S. Fish and Wildlife Service's Bay-Delta office in Sacramento. He has shot just about every local sports team for the Sacramento Press, including local colleges, the Sacramento River Cats and Sacramento Republic FC. He resides in Curtis Park with his wife Sharon.