In late 2010, comedian Michael O’Connell joined forces with Steve Danner and Eric Mee to perform a show at the Sacramento Comedy Spot. The show sold out, and far from your average stand-up comedy troupe, each of the trio’s members offered their own humorous take on life with a disability.

A few months later, in February 2011, Bay Area comedian Nina G approached the trio for an opportunity to perform a guest set.

“She got up on stage and just smoked the rest of us,” said O’Connell, a member of the group and the show’s producer. “We really needed her in the group. That’s when it became the real Comedians with Disabilities Act.” 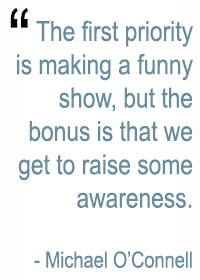 From coast to coast, the group’s success has been growing. They’ve performed at locations in Los Angeles, New York, Tennessee, and once, unknowingly, did a show for Laugh Factory Live on the PlayStation Network.

“The first priority is making a funny show,” O’Connell said. “But the bonus is that we get to raise some awareness … we’re talking about the things we go through in our lives in a way that everybody can relate to and understand.”

This awareness is two-fold for O’Connell, who hopes not only that The Comedians with Disabilities Act informs able-bodied people, but also provides a sense of encouragement and community to those with disabilities.

The comedians have seen both effects firsthand. Following a show in New York, a woman approached Danner admitting that prior to his show she had been afraid of little people. After their first show at the Comedy Spot in Sacramento, they were approached by a woman who had not left her apartment alone in the nine years she had been blind.

“That’s what this show is all about,” O’Connell said. “It’s a show that educates the able-bodied, but also brings disabled people together.”

Remaining close with their Northern California roots, The Comedians with Disabilities Act will be performing their acclaimed show at the Punch Line Comedy Club in Sacramento on July 16 at 8 p.m. Tickets are $15.00 and available at www.punchlinesac.com.

“If people are nervous coming to this show thinking that it’s some kind of charity thing, no, it’s really a comedy show at a comedy club, and it’s okay to laugh at us,” O’Connell said. “This is the one place you have permission to laugh at disabled people, so don’t pass that up.”