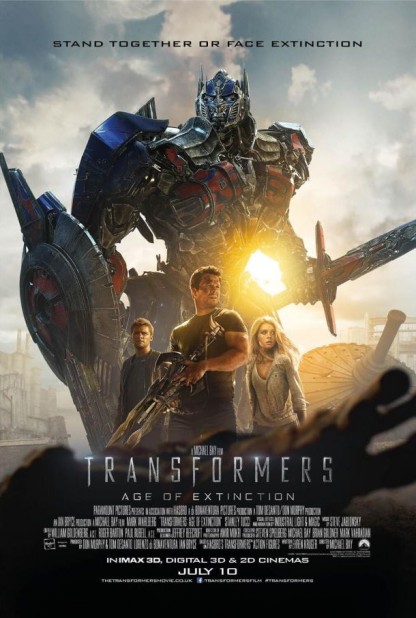 The first three Transformers movies are based around a central, stiff, somewhat larger than life, robotic character of dubious intent. But Shia Lebeouf isn’t even in the new one.

It’s so easy to make fun of these movies that it seems a little like taking candy from a baby – but Michael Bay is so deep into the process of making money that I’m sure he doesn’t care what anybody says – and neither will most of the audience who want to go and see cool effects and loud explosions, of which there are a great many.

I’ve been asked multiple times this week if the new movie is as bad or worse than the others (and that’s the way the question gets phrased, which says a lot). It’s a hard question to answer but the films have been getting steadily longer, with the new one clocking in at a welcome-overstaying 2 hours and 45 minutes – so even if the density of badness is constant, the total badness is greater, and at some point it becomes exhausting. I’ve watched video this week of the new IRS chief getting grilled by congressional committees for two days and I wonder which experience seemed subjectively longer. If only “Age of Extinction” had more of a literal payoff.

The major problem with all of these films is that they’re stories in support of action and not action in support of stories. It’s allan excuse to make bigger and louder bangs – some of which are fun to watch – but you can’t afford to dwell on the substance (or lack thereof) in between. If the plot calls for Character A to beat Character B in a fight, then Character A will beat Character B in a fight. If the plot later calls for Character B to beat Character A, then that will happen too, regardless of whether or not something has caused Character B to strengthen or Character A to weaken in between the fights. If a chase sequence with small alien aircraft seems like it would add to the visual overkill, then suddenly there are several several small alien aircraft in a chase sequence – it doesn’t matter that they haven’t been evident earlier and will likely disappear again. It’s all visual spectacle expediency, all the time. It makes as much sense as  Transformer trying to stay under the radar while looking like a Bugatti Veyron rather than, say, a Honda Civic.

As mentioned, disparagingly, Shia LeBeouf is out and now Mark Wahlberg is in as the human protagonist. His acting record is quite varied but he’s pleasantly average here, doing what needs to be done to play second fiddle to a bunch of special effects. The storyline has moved forward to the aftermath of the last showdown in Chicago, with a rogue CIA veteran (Kelsey Grammar) attempting to rid the world of the alien presence – by scheming with a different alien presence, naturally. In an inconsistent but occasionally scene-stealing performance, Stanley Tucci plays a corporate CEO who has managed to harness the alien technology in order to build a new generation of Transformers which, again naturally, doesn’t go quite as smoothly as he had planned. And maybe I’m in the minority on this one, but it’s counter-productively distracting for me when giant Transformers have recognizable voices, such as those provided by John Goodman and Ken Watanabe.

The result is big, long, loud and messy. It’s like the KFC Double Down or Taco Bell Big Box Meal of filmmaking – you know you’re getting a lot of content for your money but you also know it’s dubious content to begin with and you’d probably be better off with less of something else. But “less is more” is about as foreign a concept to Michael Bay as subtlety and character development – so it’s not like anything here will be a surprise to anybody choosing to watch (or avoid) the film. It’s about as guaranteed an outcome as you can get in cinema.

There’s something inherently disappointing about movies about music that fall a little flat. “Begin Again” isn’t an awful movie by any means, and it makes for pleasantly light and non-explosive counter-programming against “Transformers,” but it’s either disappointingly bland or blandly disappointing.

Mark Ruffalo plays a down on his luck music executive who discovers a songwriter (who can also sing) played by Kiera Knightley at an open mic night. He’s only even in the bar in order to get the next drink in a night of drunken wandering but she cuts straight through his foggy awareness and captures his attention. She’s also in the dumps after breaking up with her rising star boyfriend, played by Adam Levine of “Maroon 5” and ”The Voice.”

The thrust of the plot involves the recording of an album in outdoor settings around New York, with ambient sounds (traffic, people, etc.) becoming part of the tracks. The irony being that the majority of the singing we hear in the movie, from a pleasantly capable Knightley, all sounds extremely clean, sterile and studio-based.

The other problem, in my opinion, is that the movie feels a little like it’s missing an act. Think of a romantic comedy just as an example of a generic three act structure: The couple meets cute in some unlikely or coincidental way; everything goes well until something yanks them apart suddenly (“What do you mean, you only dated me because you lost a bet!?”); and then they have to get back together again. “Begin Again” feels as though it has a first and second act and very little, if anything, in the way of a third act. I’m not a stickler for a three-act structure, and the industry is far too dependent on it, but the way this story feels like it’s missing something is not just about the structure and more about the lack of any significant drama in what appears to be a film attempting to be a drama.

That said, it’s still interesting on some levels. The title itself is interesting as it applies to both central characters, who each need to reinvent themselves in some way, albeit that one has had a long and successful career and the other is just getting started. But it’s also interesting as the film itself quite literally begins again multiple times, starting with the open mic encounter and then, in turn, backtracking to show us how each of the lead characters got there. It’s a neat approach but there isn’t really anything else in the film that matches that flair.

The film’s music is also appealing, as are most of the performances. Catherine Keener isn’t given much to do as Ruffalo’s wife, but is solid as ever, and Hailee Steinfeld brings more to the screen as the disgruntled teenage daughter of Ruffalo’s absentee father than many do in such insubstantial roles. Whereas CeeLo Green seems present only to give the film a little extra music industry street cred, while Adam Levine (who is decent enough in his role to show promise) seems cast in order to make the soundtrack album more marketable.

All of which adds up to a moderately entertaining, musically enjoyable, lightweight film of no great consequence. There’s more in the way of character arcs (which I often enjoy) than compelling story and a pleasant message for young (and maybe older) viewers about being true to oneself and one’s vision. But, despite neat components, the total just isn’t especially fulfilling.

It’s the cinematic opposite of “Transformers” and instead of leaving you feeling overstuffed it leaves you wondering what to have for dessert. I’d recommend watching, or rewatching, “Once” – a far better (and perhaps prophetically named) film about music and relationships from the same writer/director. It’s like he found the magic once and began again, but couldn’t quite actually capture it again. We’ll have to see how his next music-oriented film, “Sing Street” (currently in pre-production), fares.

Hot Dogs and History at the CSA Carnival!
The Sacramento River Cats are Going Wild with the Sacramento Zoo
Comment