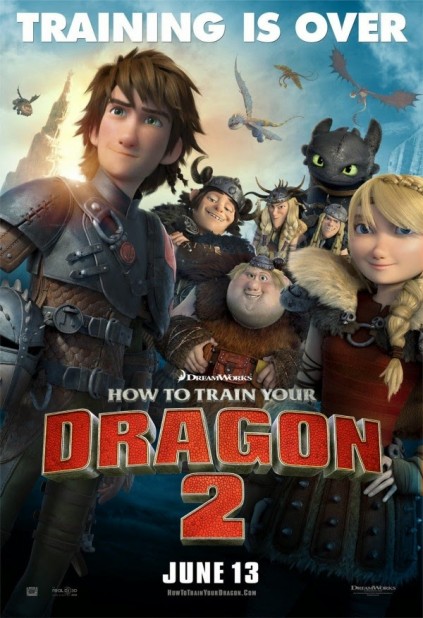 A week of sequels at the movies

The two major releases this week are both sequels: “How to Train Your Dragon 2” and “22 Jump Street.” Both will lack context if you haven’t seen the respective original, although neither would be unwatchable (at least not for that reason). It’s worth noting that both are Jonah Hill projects as, in addition to starring in the “Jump Street” films, he voices one of the secondary characters in the “Dragon” films.

How to Train Your Dragon 2
Directed by Dean DeBlois

I thoroughly enjoyed 2010’s “How to Train Your Dragon” and was even enough of a fan of the material to go out of my way to see the ‘live action’ version of the story that toured arenas, with dragons constructed by the same team that had previously worked on “Walking with Dinosaurs.”

The first film told the story of a small village of Vikings who had a long running battle with local dragons who burned their buildings and stole their sheep (and occasionally people). Hiccup, the son of the Chief, was a puny kid who felt out of place and who, after shooting down a Night Fury (the rarest of the rare dragons), formed a special bond with it and proved that dragons had been misunderstood all along. It had an almost perfect blend of coming of age elements, rebellion, adventure, fantasy, and the classic “boy and his dog” themes of stories like “lassie” (although Toothless, the Night Fury, is animated with more cat traits than dog traits). It was a film that was all about discovery and wonder associated with those discoveries – and the flying sequences were exuberant, beating even those of “Avatar.”

That’s a very tough act to follow and the inherent problem is that the tone or focus almost has to change. It’s very difficult to repeat a sense of first-time discovery and wonder – although the film certainly tries to do that in certain sequences as Hiccup meets people and goes to places that are new to him.

But where the first film was more about character and experience, the sequel is driven more by a relatively conventional story. A few years have gone by and the village has settled down into an easy routine of codependent domesticity with the dragons. They’ve even developed their own sport of dragon racing, although it looks a little too much like things we’ve seen elsewhere, like Quidditch from the “Harry Potter” series (complete with a black snitch, errr…sheep…that outscores everything that precedes it). All of which is obviously too idyllic to last and we’re given a grand villain in the form of an old acquaintance of Hiccup’s father who has a distinctly different perspective on dragons.

There’s actually some neat content in this new film about animal behavior and the way that certain species rally around an alpha individual – and it could form a useful basis for further research for young viewers. But it just wasn’t as overwhelmingly captivating as the first film – I’m not really sure how it could have been, for reasons already mentioned.

It’s still a neat film, and very well animated. The original lead voice actors are back, including Jay Baruchel as Hiccup, Gerard Butler as his father, Craig Ferguson as his father’s best friend, and America Ferrara as Hiccup’s sweetheart Astrid. Added to that are some noteworthy new voices for new characters, including Cate Blanchett, Kit Harrington “Jon Snow in HBO’s “Game of Thrones”), and Djimon Hounsou.

I’d still recommend the film, despite feeling that it’s a lesser overall outcome than its predecessor. On some level it feels like a fall from grace, and there may be some disappointment in that regard – but at the same time, the first film was so very good that there’s room to fall and still be good. This film feels a little like an album from a favorite band, just not their best album – not the album you’d tell somebody to buy if they were only going to buy one, but still one that’s worth listening to

I wasn’t a huge fan of “21 Jump Street” (the prior film as opposed to the original TV series) when it came out a couple of years ago. It was funny in parts and I routinely enjoy watching both leads, Jonah Hill and Channing Tatum, in other projects – but it didn’t do that much for me. I also find it odd that people would want to resurrect these old TV shows by turning them into something completely different. Shows like “21 Jump Street” and “Starsky and Hutch” were one hour police dramas, not buddy comedies and the newer film version do little with the original material other than to steal their brand equity.

Unlike “How to Train Your Dragon 2,” “22 Jump Street” is the kind of sequel that isn’t narratively driven and does little, if anything, to advance a storyline or even to develop the lead characters. Instead, much like the second in the “Hangover” series, it largely sets out to replicate the first movie and it’s at its funniest when it’s pointing this out to the audience. It’s certainly not a film that takes itself seriously and the script repeatedly makes fun of sequels in general and this sequel in particular.

Hill and Tatum as Schmidt and Jenko are tasked, once again, with going under cover to ferret out a drug dealing ring – this time in college rather than high school, although there are still multiple jokes about their apparent ages. The title of the film (which refers to the street address of their headquarters) is explained by having their unit move into the property across the street from the past location. There’s already a joke at that point in the movie about the likelihood of them moving into #23 next (and there’s a montage of many ridiculous concepts for future undercover assignments that appears over the end credit crawl).

The problem, for me at least, was that the film itself just doesn’t deliver any sense of originality – and there’s only so far you can go with a series of running jokes about how derivative the movie is. It feels like an attempt to make a bad movie and then make it good by openly pointing out how bad it is. It’s an amusing concept but it’s not enough to carry the film.

There are individual scenes that are funny, or even very funny, but there’s not a great amount of cohesion in the film. There’s also a mixture of scenes that feel scripted and improvised, with some overstaying their welcome. On balance, it felt like the number 22 had more to do with the minutes of solid material in the film than a street location.

So far, it’s getting generally positive critical reviews, albeit with only modestly positive ratings. For example, on the review aggregator website rottentomatoes.com, 83% of the reviews are in “fresh” territory but the average critic’s score is only 6.8/10 (at the time of writing this column). All of that said, as a film that recovers old ground, it’s likely that people who liked the first film will like this one also. The tone and humor are similar and it will probably do well at the box office.