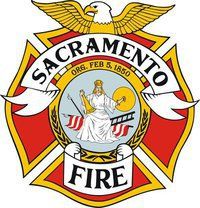 This morning just before 10 a.m. Sacramento Regional Dispatch center received multiple calls reporting an apartment fire with explosions. Fire crews from both Sacramento and Sacramento Metro Fire Departments responded and arrived within minutes to find fire blowing out of an upstairs window. The apartment was occupied at the time of the fire and officials were informed that citizens assisted one adult male occupant from the apartment that was on fire.

Quick actions of the fire crews kept the fire from spreading to adjacent apartments; however during the fire operations Sacramento Police were requested to respond to restrain the resident from attempting to re-enter the apartment while it was on fire. Fortunately no one was injured and the initial reports of explosions were determined to be from the fire burning materials inside the apartment.

The cause of the fire is currently under investigation and has not yet been determined. The upstairs apartment was completely destroyed and adjacent upstairs units suffered minor smoke damage. At this time the Sacramento Fire Department would like to remind everyone not to attempt to re-enter a building once it is on fire. Fire doubles in size every sixty seconds, and one inhalation of smoke can be fatal.

In the City • Urban Development