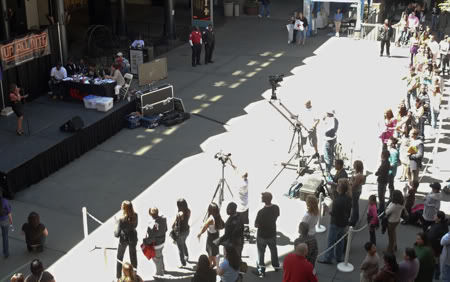 The Judges judge and the waiting line waits!

A little Hollywood-style excitement came to the Downtown Plaza on Saturday, April 4th. The event was an open casting call for the planned late night show “Up All Nite” from Deon Taylor Enterprises. Deon is a champion of local indie production, with a studio facility and multiple feature films and shows about to be released and productions that have remained in Sacramento despite the siren call of multiple, cumulative production incentives from other states and cities. I asked Deon a few questions in a quiet moment:

CW: Could you tell me a little about the concept behind “Up All Nite?”
DT: Basically the concept is to bring a live entertainment show here locally that highlights people that are in the entertainment space: writers, producers, directors, actors – whatever it is that you do – dancing! And to really highlight that because I feel there’s a lot of talent here locally and a lot of people who don’t really understand how to get into LA. Hopefully this show would let people see other people do their things and become an aid to help them get out.

CW: You’re producing a lot of material for TV and film here in Sacramento. Why Sacramento and why now?
DT: I think Sacramento now because I live here. I enjoy the area, I enjoy the place. Even though I’m in LA two or three days out of the week, I still come right back here. And like I said before, I think it’s a a growing market and I think there’s a lot of talent here and so I like to call myself one of the pioneers trying to bring entertainment into the space. Just like you man, you should be writing for Vibe or Entertainment Weekly very soon! [I laugh]

CW: So is this easier to do here because there aren’t 100 people on every street corner doing the same thing or would this be easier to do in LA?
DT: Yes and no. I think it would be received more easily in LA, but I think you have different battles. I think here the battle is trying to conform or change people’s mindsets to accept something like this here. Everyone wants to cheer when you fail and everyone wants to cheer when you win and you’ve got to make it work. Like I said, its different battles. In LA it would be accepted, but there’s 100 people doing it. Here it’s like will they accept it on top of them trying to accept it – can you keep their attention span long enough for them to want to have it more.

CW: What else else can people expect from Deon Taylor Enterprises?
DT: Everything man, everything. I’m working really hard to try to create a brand that speaks to all audiences from comedy, to horror, to cartoons, it doesn’t really matter. I have a lot of things in development. I think my next venture outside of shooting the film “Terminated” this summer is a cartoon I’m doing, called “Snappy the Lion” which is pretty funny and really cool. Snappy, like people are real snappy when they wake up or argumentative. Snappy!

One of the roles they were auditioning for was a cynical movie reviewer – so, naturally, I tried out. While in line I bumped into local actor and comedian Mikhail Chernyavsky, who seemed like a strong contender for the show’s host:

Mikhail Chernyavsky auditions for Up All Nite

CW: So why come down today?
MC: They had an audition for a TV show and as a standup comic that’s the natural transition for me. I want to do TV and I’ve always wanted to host a show and I’ve had fun hosting other [events] and I thought this would be a fun way to explore the Sacramento community!